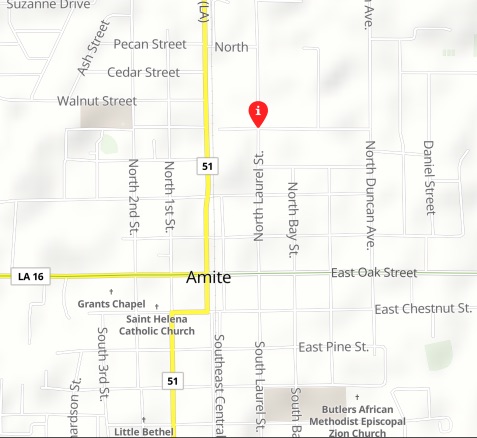 If you would like to become a member of SELARC, please print out and complete the application/renewal form and return it with your check to: P.O. Box 1324, Hammond LA 70404. Thanks!

2019 Membership Dues are now due and must be paid by the March meeting!! Please use the application/renewal form!

Special thanks to the following members contributing to the great success of the Hamfest by selling 20 or more prize tickets before the event.
These members are considered paid for 2019 annual dues because of their ticket sales:

Hammond VE Group - ARRL/W5YI tests are scheduled for the last Sunday of each month [with the exception of holiday conflicts] in Room "B" of the North Oaks Medical System Diagnostic Center at 2pm with $15 testing fee. Bring photo ID and any appropriate CSCE. For more information contact This email address is being protected from spambots. You need JavaScript enabled to view it. or Find an Amateur Radio License Exam in Your Area.

If we missed your birthday, please let us know.

OK, enough is enough with the rain! That being said, be careful when stepping outside in this radically changing weather as I am now, laid up with a broken ankle, by way of wearing slick bottom Crocs and trying to navigate the wet grass and mud. Moral of this story, do not wear slick bottom foot-wear in wet enviroments! SAFETY FIRST......and LAST!!!!!

Mardi Gras season is almost over and Easter will soon be staring at us as well as the upcoming Strawberry Festival and Special Olympics. There was some discussion on operating the special event station at the past meeting and what locations might be used away from the Festival grounds, so keep this in mind for the upcoming meeting in Amite.

The Louisiana Special Olympics is another operation where we shine with our communcation skills, so PLEASE, volunteer youe time to help with this effort also!

This email address is being protected from spambots. You need JavaScript enabled to view it. - President

Minutes of SELARC Meeting of February 12, 2019 at Ponchatoula Community Center

President Tyrone Burns N5XES called the meeting to order at 7:00 PM at the Ponchatoula Community Center and led in the Pledge of Allegiance, followed by a self-introduction of all present.

Committee Reports:Hamfest
(Tyrone N5XES) : The Hamfest was well-attended with positive feedback from vendors, impressive ticket sales, and approximately 422 guests.
The Rig Expert AA-230 is then presented to the prize winner Bill Hayden.
The winner of the Hamfest 1st prize took the cash-equivalent $500, so the item is retained by the club to sell or raffle. It was m/s/passed to raffle the Yaesu FT-891 HF Transceiver with 60 tickets at $10 per ticket; the drawing to be held after all 60 tickets are sold with no time limit. See Carol KE5GOC to purchase tickets.

Repeater (Tyrone N5XES) - All repeaters are on the air.

ARES Report (Pat KE5KMM): There was good turnout at the Hamfest forum (approximately 30); Bob was honored and presented a plaque by John Mark Robertson for his time and dedication. A plaque as also presented by Ed, and John Mark Robertson officially announced the Ed Mason (KE5GMN) is now DEC for Region 9.

(Ed KE5GMN) Reminds to check into the nets, including the HF Net and Weekly 2 meter nets on Mondays at 8:30 PM.

New Business: Elections: (Tyrone N5XES)- Elections are to be held at the July meeting

TeamApp: Scott KD5PCK: discussed/presented the TeamApp service/mobile application that may be useful to the club members.

Adjournment: It was m/s/passed to adjourn the meeting at 7:30.

Hustler Vertical 6BTV+, 17 Meter Add-On
Omni 6 rig with power supply
Contact: This email address is being protected from spambots. You need JavaScript enabled to view it., 985-630-2200

Request for: Any Operators local interested in starting projects or joining one in progress?
From This email address is being protected from spambots. You need JavaScript enabled to view it. - KF5GOI

Submitted from Ascension Amateur Radio Club K5ARC: The March 2019 volume of the Ascension Airwaves is available.

==> FCC Invites Comments on Amateur Radio-Related Petition for Rule Making
The FCC has invited public comments on a Petition for Rule Making (RM-11826) from an Ohio radio amateur seeking to amend the Part 97 station identification rules to better accommodate and simplify station identification during an emergency net, drill, or activation. ARRL member Robert A. Dukish, KK8DX, filed the petition in December, and the FCC put it on public notice this week. Dukish seeks a change to Section 97.119(a) of the rules, which requires an amateur station to transmit its "assigned call sign on its transmitting channel at the end of each communication, and at least every 10 minutes during a communication."
He noted that during emergency networks, requiring participating stations -- often portable -- to use their assigned call signs during each transmission could prove "burdensome and can hinder the flow of emergency traffic on the channel." ...

==> US Navy Explores Amateur Radio as a Training Adjunct
The US Navy's Naval Air Warfare Center Weapons Division (NAWCWD) has adopted Amateur Radio training as a possible new approach to basic RF and electronics instruction. More than 20 NAWCWD employees took part in a week-long class in Point Mugu, California, in December. The class, which culminated in an examination session for the Technician licensed, offered NAWCWD employees a novel approach to teaching radio propagation, said Brian Hill, KF4CAM, the lead for electromagnetic maneuver warfare experimentation in the NAWCWD Avionics, Sensors and E*Warfare Department. Hill, who got his license while he was still in high school, is also the department's "innovation ambassador." ...

==> Microsoft Compatibility Official Steers Enterprise Users Away from Internet Explorer
Microsoft, which transitioned to its new browser, Edge, several years ago, is now advising enterprise users to avoid its legacy browser, Internet Explorer (IE). Microsoft Worldwide Lead for Application Compatibility Chris Jackson said that IE isn't really a browser but a "compatibility solution" to deal with legacy sites. Microsoft no longer supports IE with new web standards, which is at the core of the problem. In a new blog post ...

==> New Plan Aligns ARES with the Needs of Served Agencies The new ARES Plan adopted by the ARRL Board of Directors at its Annual Meeting in January represents an effort to provide ARES with a clearly defined mission, goals, and objectives; specific training requirements, and a system for consistent reporting and record-keeping. The Board's Public Service Enhancement Working Group (PSEWG) spent more than 3 years crafting the ARES Plan which, ARRL officials believe, provides a much-needed update of the program's role in public service and emergency preparedness in the 21st century. Concerns focused on bringing ARES into alignment with the National Incident Management System (NIMS) and Incident Command System (ICS), and creating more consistent and standardized ARES training requirements. Given dramatic changes and upgrades in national, regional, and local emergency and disaster response organizations, ARRL faced a major challenge, said ARRL Great Lakes Division Director Dale Williams, WA8EFK, who chaired the PSEWG.

"If we didn't address these issues, such as training standards and organizational management, ARES faced the very real possibility that it would no longer be viewed as a valid and valuable partner in emergency and disaster relief situations," Williams said. ... 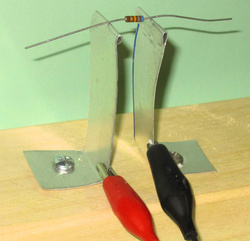 Paul Danzer, N1II, was faced with sorting a box of 100 old resistors to verify their approximate values. The idea of attaching digital multimeter clip leads to each resistor 100 times was not very appealing. His solution was to build a fixture from thin sheet aluminum. Each leg is approximately 1 inch wide, and the tops are bent over to eliminate any sharp edges. The meter leads are clipped to each leg. To measure a resistor, all you have to do is lay it across the two legs. If the connection seems a little less than solid, a bit of finger pressure applied to the resistor might help. Quick and easy!

==> Over-the-Horizon Radars Raising the Ire of European Monitoring Systems
The January issue of the IARU Region 1 Monitoring System (IARUMS) newsletter reports the Russian "Sunflower" coastal radar, located east of Vladivostok, is being heard at nights on 3,716 kHz and 6,860 - 7,005 kHz, as well as on several 60-meter frequencies. A Chinese wideband over-the-horizon (OTH) radar also appeared on 7,000 kHz in early January.

==> V84SAA DXpedition is Front-Page News in Brunei The V84SAA DXpedition February 6 - 18 received a great deal of positive attention in Brunei -- a tiny nation surrounded by Malaysia on the South China Sea. The arrival of the DXpedition team not only merited coverage on the local evening newscast, but a front-page newspaper article. According to the article, the DXpedition aimed "to increase cooperation among [Amateur Radio operators] besides instilling the spirit of teamwork and fostering close ties. The expedition also serves to help promote the country's uniqueness and natural heritage through Amateur Radio." ...

--The ARRL Letter and The American Radio Relay League