Please come ready to discuss the Club Christmas Party -- We need someone to head this up.

If you would like to become a member of SELARC, please print out and complete the application/renewal form and return it with your check to: P.O. Box 1324, Hammond LA 70404. Thanks!

A Contest for Young Hams - Sponsored by Hamstudy.org - on December 1st, 2018, the Young Amateurs Radio Club will be holding its' second ever contest, and first annual Winter QSO Party, sponsored by Hamstudy.org! The goal of this amateur radio contest is to get the youth involved; to incentivize everyone to get on the air, there are loads of prizes! In order to be eligible for prizes, however, your station must have a median age at or below 30. The full contest rules can be found here.

Multiple Sclerosis "Dat's How We Roll" Bike Tour the 150-mile ride from Hammond to Percy Quin Park in Mississippi held on Saturday, Oct. 6 & Sunday, Oct. 7. was a success: Thanks to the amateur radio operators who participated! Click here for pictures

Hammond VE Group - ARRL/W5YItests are scheduled for the last Sunday of each month [with the exception of holiday conflicts] in Room "B" of the North Oaks Medical System Diagnostic Center at 2pm with $15 testing fee. Bring photo ID and any appropriate CSCE. For more information contact [email protected] or Find an Amateur Radio License Exam in Your Area.

If we missed your birthday, please let us know.

Congratulations to the following new HAMs and Upgrades!

Again, many thanks to all VEs who attend our sessions and give back to Amateur Radio! you are greatly appreciated!!!

Well, another month has fallen by the wayside, GOODBYE October and HELLO November! The SET is behind us and Thanksgiving and Christmas are in front of us.

It is now that time of year to jump on that ol' antenna/tower project that you've been putting off all year because of the extreme heat and wet weather. We normally only get a few good days this time of year, so hopefully, you have planned ahead and are ready to "GIT R DUN"!!!

Also, as the leaves are falling and filling up the rain gutters, give some thought to maybe using them as an HF antenna if the are made of steel, aluminum or copper, with a little ingenuity, a decent 9:1 or 12:1 balun and antenna tuner, you can have an all weather antenna on the cheap that will handle most all the low bands and will be very stealthy! Not to be discounted, even the vinyl gutters and down-spouts can be used to hide a wire loop or dipole antenna. The down-spouts make great hiding places for vertical dipoles for VHF and UHF. Wooden privacy fences also make great supports for NVIS loop antennas. Not sure how to do it, just contact me and we can meet to figure it out! Even the sewer vent pipes sticking out of your roof are capable of supporting /hiding a VHF/UHF verticals. Vinyl lattice work also is great for hiding antennas. The possibilties are endless when you set your mind to it!

Last month we talked about the SELARC Christmas Party. We need someone to jump upon the seat and take the reins on this to make it a success. We talked about pot-luck again this year. Location is locked in, so we are good to go!

Please....we need a go-getter to make it happen!!!


hope 2 CU at the meeting at the Ponchatoula Community Center!

The meeting was called to order 7 PM at the Tangipahoa Parish EOC by President Tyrone Burns N5XES who led in the Pledge of Allegiance, followed by a self-introduction of each person at the meeting. It was m/s/passed to accept minutes for the September 11 meeting as published with corrections. A link to the minutes and photos from the September meeting were posted at the following link: Meeting Photos (9/11/2018) - http://www.selarc.org/meeting201809.html

Correspondence: A new membership application with dues was received from Larry KJ6SET (General class). It was m/s/passed to accept the application.
A bill was received for annual tower rental.

Committee Reports: Repeater(Tyrone N5XES) - The 147 repeater with controller is back in service, Tyrone and Bob went to maintain batteries; although there are some controller bugs, VHF sounded alright. The HMU Digipeater is also back on the air.

ARES(Pat KE5KMM) - Keeping an eye on the tropics, and the annual SET is on October 20th.

Old Business: Bob WB5FBS mentioned that transferring the SELARC webpage to new hosting was done; Please send any information, requests, or problem reports with the website to Jimmy AG5EJ.

Community Center Radio Room: Tyrone N5XES provided the update that we had cleaned up the floors, and Lynette seemed satisfied - however, ceiling tiles are still to be replaced, and further attention may be needed afterwards.

Ms Bike Tour -- (Bob WB5FBS): 33 amateur operators filled all 26 positions across both days using the 147 repeater and with permission ARES 442.75 providing a real-world test for that system, and successfully maintained continuous contact. At the bike tour, there were two minor incidents which were handled well, and MS bike tour people were delighted with the turnout, quality of operation, and the service provided. This was a great display of Amateur Radio as a public service: thanks to the hams and SELARC for the 147 repeater.

New Business: (1) Christmas Party 2018: (Tyrone N5XES): Considering Options with a firm date of 11 December, unless there are conflicts, and plan for pot luck with club providing entrée, and members bringing side dishes. And Tyrone raises the question if we should have "dirty santa" at the party, and asks for iscussion:
It is requested for a member to volunteer to organize the party.
With no forthcoming responses- the matter is delayed for discussion next meeting.
(2) Carol KE5GOC: SELARC Decal stickers are available for purchase for $2, please see Carol KE5GOC if interested.

Adjournment: The club business was followed by a presentation. The next meeting is planned to be back at the Ponchatoula Community Center on November 13, 2018, and it was m/s/passed to adjourn at 8:02 pm.
Submitted by Vice-President/Secretary Jimmy Hess AG5EJ 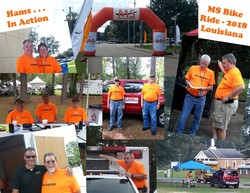 The skilled and dedicated hams provided over 400 people-power hours of communications support to the logistics, medical and safety teams for the ride. The Southeast Louisiana Amateur Radio Club (SELARC) VHF repeater and Louisiana ARES UHF repeater systems provided excellent coverage over the route into Percy Quin Park in Mississippi. This was the 33rd year that local ham operators participated in the tour and they were highly praised by Multiple Sclerosis officials and the many friends and family members of the cyclists along the route. -- Bob Priez, WB5FBS, Louisiana ARES District Emergency Coordinator (Photo collage by KE5KMM)

==> ARRL, FCC Discussing Issue of Uncertified Imported VHF/UHF Transceivers
ARRL has taken a minor exception to the wording of a September 24 FCC Enforcement Advisory pertaining to the importation, marketing, and sale of VHF and UHF transceivers and is in discussion with FCC personnel to resolve the matter. The Enforcement Advisory was in response to the importation into the US of certain radio products that are not FCC certified for use in any radio service, but identified as Amateur Radio equipment.
"While much of this equipment is actually usable on amateur bands, the radios are also capable of operation on non-amateur frequencies allocated to radio services that require the use of equipment that has been FCC certified," ARRL said. "Such equipment is being marketed principally to the general public via mass e-marketers and not to Amateur Radio licensees." ARRL said the upshot is that the general public has been purchasing these radios in large quantities, and they are being used on the air by unlicensed individuals. "Radio amateurs have complained of increased, unlicensed use of amateur allocations by people who are clearly unlicensed and unfamiliar with Amateur Radio operating protocols," ARRL said. But while it supports the general tenor and intent of the Enforcement Advisory, ARRL said it disagrees with the FCC on one point.
"In several places, the Enforcement Advisory makes the point that 'anyone importing, advertising, or selling such noncompliant devices should stop immediately, and anyone owning such devices should not use them,'" ARRL pointed out. "The Advisory broadly prohibits the 'use' of such radios, but our view is that there is no such prohibition relative to licensed Amateur Radio use -- entirely within amateur allocations -- of a radio that may be capable of operation in non-amateur spectrum, as long as it is not actually used to transmit in non-amateur spectrum.

==> Ham Aid Kits Positioned to Deploy as Typhoon Yutu Ravages Central Pacific Islands
In a little more than one day, the cyclone that became Super Typhoon Yutu grew from tropical storm to a Category 5 monster. Yutu is said to be the strongest storm on record to hit the Northern Mariana Islands, home to about 55,000 people. The storm made landfall on Wednesday evening (October 24), destroying homes, wreaking severe wind and storm-surge damage and flooding, and knocking out water, power, and telecommunications on the islands. Utilities could remain down for an extended period.
Before reaching the islands, Yutu's sustained winds were reported to be 175 MPH.

=> Weather has forced an early shutdown of the VP6D Ducie Island DXpedition. The team announced just after 1600 UTC on October 31 that, "due to an expected worsening in landing conditions," it would cease operations. The final contact count was 121,136. Most contacts -- 67,686 -- were on CW, with 28,736 on SSB, and 24,714 on digital modes. "It's been raining all night, with 20+ knot winds," an October 31 news bulletin from the team said. "The ship is about 300 meters off shore, the forecast indicates continuing 20+ knot winds, 2 - 3 meter seas. We want to thank everyone for their support, and hope we met your expectations.

==> Yasme Foundation Announces Supporting Grant to ARISS and Excellence Awards
The Yasme Foundation has announced "a significant grant" to Amateur Radio on the International Space Station (ARISS) in support of ARISS's effort to upgrade Amateur Radio equipment and systems on the space station. ARISS mounted a fundraising campaign earlier this year to cover the costs of its next-gen Interoperable Radio System, which will replace the aging and intermittent ISS Amateur Radio gear now in space. "Putting and keeping Amateur Radio in space is a significant expense and needs the support of the entire amateur community," Yasme Foundation President Ward Silver, N0AX, said in announcing the grant as well as several excellence awards. Silver noted that ARISS-International delegates learned recently that an ARISS plan is under consideration by NASA's Deep Space Gateway (DSG) program.
The Yasme Excellence Award is presented to individuals and groups who, through their own service, creativity, effort, and dedication, have made a significant contribution to Amateur Radio.

--The ARRL Letter and The American Radio Relay League